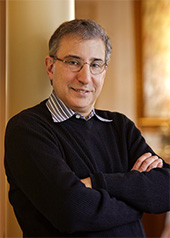 He has been in private practice in Plano, Texas, since 1991. He has been recognized as a ‘Super-Doctor’ by Texas Monthly and named to D Magazine’s list of best doctors eight times. Dr. Weisberg also serves as a board member of Digestive Health Associates of Texas.

His first novel, The Hospitalist (2014), was a prescient and humorous thriller about the practice of medicine in modern times. In 2016, Dr. Weisberg was selected to give a TedTalk on How the Art of Medicine Became a Business in the 21st Century.  He is currently writing his third novel.  He has written many short stories and poems, some of which can be viewed on his blog.

He and his wife, Sheryl, live in Dallas and have three children.

He has been named D Magazine’s list of best doctors eight times and has been recognized as Super-Doctor by Texas Monthly multiple times.

“The Hospitalist is provocative, revealing, and riveting… Weisberg has exposed how the patient-doctor relationship has changed in the modern age.”